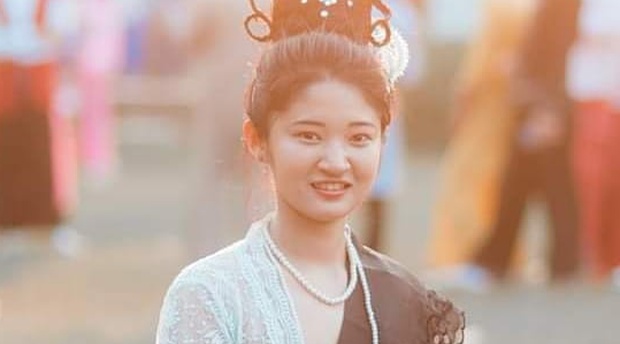 Rakhine people or Arakanese are the largest ethnic groups in Myanmar. Rakhine State is situated on the western coast in Myanmar, it is bordered by Chin State to the north, Magway Region, Bago Region and Ayawaddy Region to the east, the Bay of Bengal to the west and the Chittagong Division of Bangladesh to the northwest. Arakanese means - a Burmese people of the western Arakan coastlands of Myanmar. Sittwe is the capital city of Rakhine State. Their estimate population is around 3-4 millions.

Rakhine people comprise of different 7 ethnic groups such as Rakhine, Kamein, Kwe Myi, Daingnet, Maramagyi, Mro and Thet.  Among them, Rakhine group are the majority ethnic group in Rakhine State and have long been influenced by their proximity to India and have formed trading links with the sub-continents. Thet, Kamein, Daingnet and Maramagyi are the minority ethnic group and they live in the hills.

The Arakanese are predominantly Theravada Buddhists.  Their language has some similarities with Burmese language and also very similar to Burma in culture and traditional dress.

Rakhine men wear delicately woven longyis, shirts without collars and traditional jackets.  They also wear ready-made turbans with the wing- cloth standing to the left.  Rakhine women wear their hair in a variety styles.  They wear front-opening blouses buttoned either in the center or on the side. Their longyis are woven in beautiful designs usually consisting of horizontal stripes.  A shawl is wrapped across the body passing over the left shoulder.

Rakhine people are very talented weavers, their weaving product is very popular in Myanmar with model of Longyi skirt with complex patterns and eye-catching.

Novice ceremony and other religious festival are same as Myanmar Buddhist.  They use the long drum when held the novice ceremony. They sing the YaTu (typical ode on the season or love). They co-operate at social welfare.  Thanakha grinding event in Sittwe is also a traditional event held on the eve of Water Festival.  Sittwe is the capital of Rakhine State.  In addition, the Rakhine water festival is very famous for its joyful activities. They fill the water into a big long boat and throw the water both side of man and woman who row along the big boat.  The Rakhine are quite similar to the majority Burma people in many ways but are a completely different ethnic group with history going back thousands of years.

There are so many places to make an observation during you visit in Rakhine State and their traditional dance is also famous in the country.

Myanmar Adventure, Trekking From Chin Hill to Mrauk U