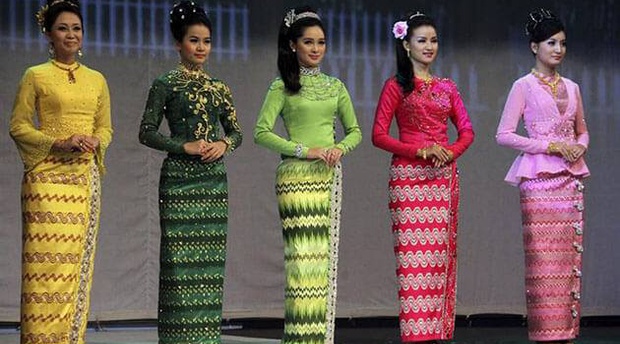 Myanmar has a population of around 51 million people, roughly 68% of whom belong to the majority Bamar ethnic group.

Since the Bamar people constitute the majority of Myanmar's population, their customs and identity are closely intertwined with the Burmese national identity as a whole. Traditional dress for the Bamar constitutes a type of sarong called a longyi (male) or htamain (female), with gold jewellery, silk scarves, cloth turbans and Mandarin-collared jackets often worn on special occasions. Though you will still see many Burmese wearing traditional dress today, in urban centres especially the trend is increasingly toward Western-style clothing and make-up.

Traditional music of Myanmar consists of an orchestra mainly of percussion and wind instruments but the saung gauk, a boat-shaped harp, is often symbolic of the Bamar. Other traditional instruments include pattala (Burmese xylophone), walatkhok, lagwin, and hsaingwaing. Traditional Bamar dancing is similar to Thai dancing. Puppetry is also a popular form of entertainment and is often performed at pwés, which is a generic term for shows, celebrations and festivals.

Buddhist festivals and holidays are widely celebrated by the Bamar people. Thingyan, the Water Festival, which marks the beginning of the Burmese New Year in April, is one such example. Thadingyut, which marks the end of the Buddhist lent, is celebrated with the Festival of Lights in October. Kathina or robe offering ceremony for monks is held at the start of Lent in July and again in November.